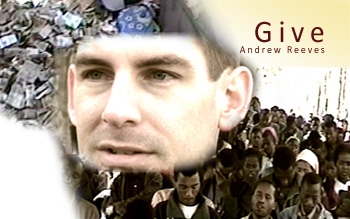 Born out of an African experience and recognition of extreme faith in the midst of a huge need.

Having been invited to attend a biannual conference in Ethiopia run by the local church, we arrived in Ethiopia carrying cash – a gift from our church to the church located in Chencha. There was a great sense of anticipation as I looked forward to their reaction as we handed over what I considered to be a large sum of money. Surely this act of generosity would make an impression.

It did. The church gratefully accepted the money and immediately announced that it would all be spent on supporting their “evangelists”. These evangelists – eighty of them – were all working in missionary capacities amongst different tribes south of the country.

Here was a church that was financially supporting it’s own people to reach out to other people with the gospel in their own country.

I was surprised that this church in the world’s second poorest nation could support eighty missionaries when western churches struggled to meet much lower commitments. But God had much more to teach me.

As the conference began, ten thousand people congregated. Some had walked for days just to be present. When the offering time came I watched people parting with their hard earned cash. In fact the dollar amounts were very small but I was instantly reminded of the woman who only had two coins to give (Mark 12:41-44).

As the days wore on, people ran out of money to give but still gave. They took the clothing off their backs and gave that. Whatever they had they gave. I sat there rebuked at my own pride. I was proud that we could give so much money to these people, but in reality they gave so much more.

If those who we consider poor can freely give so much to God then surely we are the poor ones if we cannot do the same. In the west we preach that everything we have belongs to God, but we act as though it belongs to us.

This song was born out of that realization.